From the crazy comedy movie of 2011, Bridesmaids online slot UK where you can slur out a hung over I do to the many chances to win real money. The backdrop to the reels is of a typical wedding themed pink with dainty decorations. The symbols are of the films’ characters: Lillian, Annie, Helen, Meghan, Rita, and Becca as well as a logo Wild and a Scattered cupcake. The wedding aisle runs down 5 reels, 4 rows, 40 payways, a 96.71% RTP, up to 100 AutoSpins, and a wager span between 40p and £300. There are Bonus rounds that include a special Cupcake Booster for multipliers up to x3 or extra 2 points on the Wheel Bonus. The Wheel includes 4 featurettes that award up to 10 Spins with stacked high paying symbols, growing Wilds, Rolling Reels where winning symbols disappear for a free respin of more symbols replacing the remaining empty space, stacked Wilds, a coin win, and a jackpot of 525,000 coins. Now that takes the whole wedding cake. 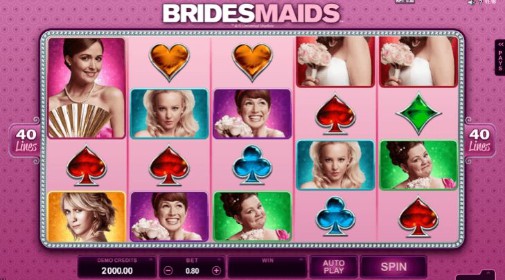 From the famous or infamous horror movie of the late 70s with the iconic pyschotic serial killer Michael Myers, Halloween UK Slot lets players stab into generous payout opportunities. The background to the reels shows the house where Laurie is babysitting, with Michael Meyers creeping around and revealing himself from different areas. Symbols are of the films characters. There are 5 reels, 3 rows, 50 ways to win, a 96.2% return to player, and a betting range from 50p to £200. An aptly named Wandering Reels feature can occur whereby 3 eels spins simultaneously stopping in 1 of 3 spots, with a giant symbol lands on the grid. There is also a Trick or Treat Wheel that can award a max 10x multiplier and also launch the Boogeyman featurette for a choice of leaves from a tree to win a 20x multiplier or 9 Spins. During the Spins, the film character that triggered the round will appear as a large symbol. 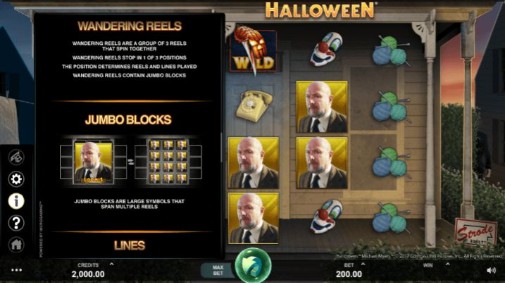 Microgaming’s Jurassic World online slot UK is based on the 2015 movie, following the Jurassic Park franchise, where resurrected dinosaurs escape and wreak havoc. The backdrop of the reels displays the large water aquarium tank where underwater dinos swim. The symbols are from the films characters such as the dashing Owner or Claire, as well as a Wild, a Scatter symbol, and dinosaurs. Feel the rumble over 5 reels, 3 rows, 243 ways to win, a 97% return to player, and a bet span from 30p to £7.20. The Wilds can become stacked on the reels for greater win formations. The Bonus includes 10 Free Spins and 1 out of 3 different features that involve special ‘Cryo’ Wilds that remain frozen on the reels for 3 wins, multipliers up to 7x, a special 14,000x multiplier award, and a rolling reels feature. The rolling reels is particularly exciting given it essentially offers the opportunity for many wins or respins on onlt a single bet. Any winning formations vanish from the reels, leaving an empty space for more symbols to fall into the spot remaining and continue the spins for subsequent win combinations. 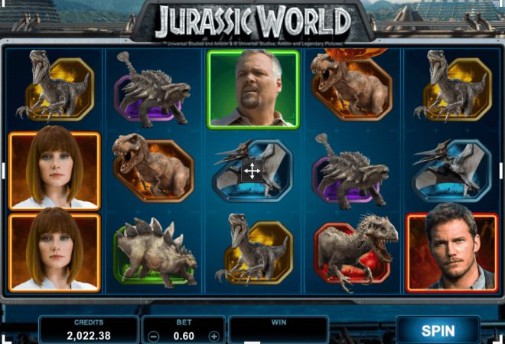 Climb to the top of the Empire State Building in Mighty Kong Online Slot and roar with excitement with the numerous chances for major rewards to be won. Based on the classic movie King Kong, that has been remade many times, the background to the reels show the tropical jungle home of Kong Skull Island while the reels are arranged as camera film. The symbols include all the movie’s leading characters – Ann Darrow, Jack Driscoll, Captain Englehorn, Lumpy, Carl Denham, aling with a Wild and King as the Scatter symbol. Pound your chest on the 5 reels, 4 wager rows, 50 paylines, a 96.4% return to player, and a wager range of 50p and £250. The Wild on the middle 3rd reel will expand to fill the entire 4 rows for more winning combinations. The Bonus round includes 1 of 4 choices that lets player decide more Free Spins with a smaller valued multiplier or vice versa. This ranges from 5 Free Spins with a 8x multiplier or 40 Spins but with only a 1x multiplier per win. 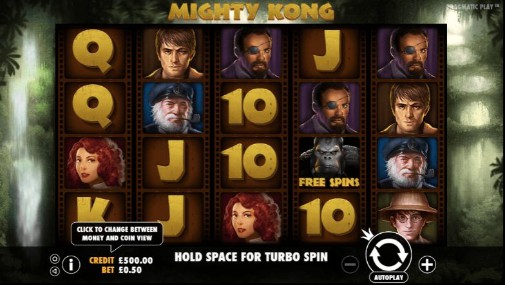 Bloopers Online Casino from Elk Studios is based on the movie industry itself and all the comical, quirky antics that occur behind the scenes. The reels themselves are set against film stock and there is a sense of being at an Award Show waiting for the Oscar winners to be announced. This is enhanced by an upbeat backing music and the turning film as the reels spin. The symbols are of the main actor, glamourous actress, a film ‘action’ clap board, a film reel, a Wild logo, and a Bonus star. The red carpet is rolled over 5 reels, 3 rows, 243 payways, a theoretical return to player of 96.1%, a terrific mobile slot gameplay, up to 100 uninterrupted AutoPlays, and a wagering span between 25p and £100. As with other Elk Studio titles, there is also a special automated betting strategy so that players can adapt their wagers to the performance of gameplay to optimize their potential winnings and expectations. On any given spin, 5 cartoon workers or set hands can walk onto the reels to activate features and at times mess up a scene. However, the generous awards they offer is more than enough for forgiveness as this includes Free Spins with a Stunt man that creates Wild expansions, the Cutter adds winning symbols, the Make-up Artist gives a bonus spin, and the Fix it blooper rearranges symbols for wins. The Sound Tech helper can also add stuck Wilds onto the reels. Further, any actor can become stuck Wilds on the reels with reels 2 to 4 filled for the Bonus and a chance for a blockbuster win of 185,000 coins. 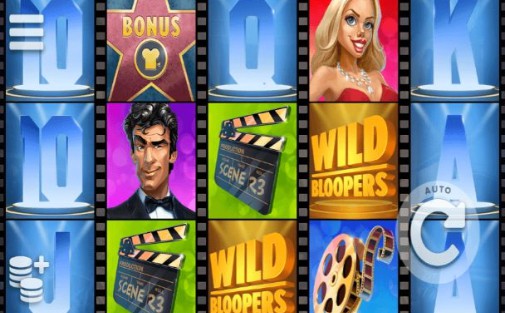 The lights, camera, and action are all happening at UKonlineslots.com where players can practice their acting skills in all these Top 5 Movie themed UK Online Slots. Counting down, there are: Bridesmaids, Halloween, Mighty Kong, Jurassic World, and Bloopers.